Hugh tells his experience finding jobs in Germany in this video. Have a look

Hi I’m Hugh, I’m a British expat from London and I’m a developer in Berlin. I’ve been here for two years.

I did a lot of traveling when I was younger, all over the place, went to dozens of cities. Just when I was leaving the UK and I was looking for the next place to go – of all the cities I went to – I really couldn’t think of a place other than Berlin, it was the place I had been to the most times, just kept coming back and it had everything I needed.

I was working in the UK in Bristol and fancied a bit of a change, so I started looking for jobs in Berlin. I found a few cool sounding companies, sent some CV’s off and one of the first companies I applied for emailed me, I had a couple of Skype interviews and then they flew me out to Berlin for a face-to-face interview. 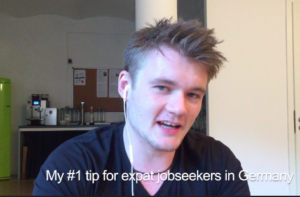 The main thing is that once I had that interview booked in, and they were paying for my flights and accommodation, I then lined up a bunch of interviews because I was in the city anyway – I lined up as many as I could – I think I did like 5 or 6 over the course of a weekend. Although I didn’t actually take the job with the company that flew me over, one of the companies that I’d interview with was a really good fit. So, get yourself over to Berlin and line up as many interviews as you can, come for a weekend, come for a week, as long as you need.

One of the things that really attracted me to Berlin is the amount of freedom you have, like outside of work if you want to grab a drink on a Sunday morning at 4 am, there are dozens of bars open 24 hours, there’s clubs playing any kind of music you can imagine. London and a lot of other cities I’ve been to, when they’re open, like until 11 to 2 am, they’re great but after that you are kind of screwed, transport is shut down, you can’t eat anything, nowhere else to go, you can’t go drinking. Berlin is one of the few cities I’ve been to where it doesn’t matter what day it is, what time it is, what you want to do, there’s something going on somewhere – that was one of the things that not necessarily drew me to the city when I first came here, but definitely one of the reasons I stayed.

So if you want a cool job, find some cheap booze in Berlin and go to expatjobseeker.de