Anni reveals her experience finding a job in Germany in the following video. Watch it now.

Hi, my name is Anni and I’m an American expat living in Berlin. I’ve been here for 5 years. I am a Visual Assets Manager at KAYAK and I’ve been doing this job for about a week and a half, but I was doing pretty much the same position as a freelancer for the past year and a half, so I’m happy to be here full-time and official now.

I always wanted to live abroad. I’ve always loved to travel and didn’t really have money to do too much abroad traveling and I would just get a job in order to feed my travel habit – I had lived in Alaska, Colorado, New Mexico and landed in Portland and I was there for a while. Then I fell in love with Spain and I told myself “I will move to Europe, I will move to Spain as soon as possible” – that’s what brought me to Europe. I could not get a visa in Spain as an American, and so I had heard amazing things about Berlin in Germany, I had actually never been here before I moved here and I had heard amazing things about the arts and the music and the culture. So I came here without really a plan but I just really wanted to be in Europe and try it out.

I basically moved here without a job, I had eaten up all my savings to get here and I had basically just had to start over. I wanted to stay here and wanted to be here and fell in love with Berlin straight away. I found work by accepting an internship, I had to start over, but it was my foot in the door and I work hard and was hired as a permanent freelancer – they had even offered me employment, but I liked the freelance lifestyle for years and I got other jobs through the colleagues that I had met at this first job. So I was able to make it work, it was a struggle but I never regretted moving here.

To find the job I was scouring the Internet, I had built a website at that time because I was a freelancer – freelance photographer but also I was a photo editor for a newspaper back in Portland, and so I was trying to use that skill-set: Be a professional photographer but also be a photo editor and just like reach out and see what kinds of jobs were here. And by doing that and networking I was able to find work. 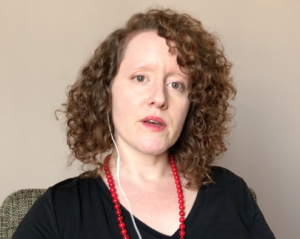 My main tip for finding work in Germany is: learn German.

The biggest struggle I deal with here is the fact that I am really not good with languages, and it’s so crucial. Yes everybody here speaks English, but the chances of you actually getting a good job in your field is speaking German and just really really trying to push the language.

Also networking. Network, network, network. If you are out of work, if you are looking for jobs – find out where people in your field are going. There are meetup groups. Build your website. Go to forums. Try to meet up with other people just to discuss. Try to put together creative projects with people – it’s through those people where you will end up finding work, not just freelance, but it’s just you meet people, you connect with them, and you know what if their company is suddenly hiring you are going to be the first person they think of – it just makes sense, so network network network and learn German.

I have no intention of leaving Berlin, I love this city. I love to travel, but I think I’ve learned from all of my years of traveling that I will continue to travel but I always need a home base. Berlin is my home base, and there’s such a vibrant culture here. There are so many different layers of history too. It’s not easy at first, but it’s never boring. You have to work hard to live here and make it here but it’s so rewarding, and it’s international so if people are nervous about living abroad, give it a try – I slowly moved over here, I came here with two bags, and then every time I went to visit family or friends back in the states I would go with two empty suitcases and then bring a little bit more. It is possible, and it’s deeply rewarding.