Eren took time recently to share his experience getting work in Germany. Check out what he has to say.

Hi, my name is Eren and I’m an Turkish expat living and working in Berlin, Germany. I’m working at KAYAK as a data scientist and it has been 6 weeks.

I didn’t come to Germany for a particular reason, it was kind of random to be honest. I wanted to do a Master’s degree, and in a lot of countries like the U.S. or UK you need to pay a lot for tuition, and in Germany it’s pretty much free, and in addition I got a scholarship which covered my living expenses and made it really comfortable.

I found work through internships, so two years ago I did an internship at KAYAK – essentially one day I was bored with schooled stuff so I used Indeed to look at internships in Berlin that would be related to my expertise which was machine learning – so I applied to a few companies and KAYAK was one of them. I applied to a few companies that I was familiar with, I was a bit picky. KAYAK got back, we did some interviews, then I did a three month internship. Towards the completion of my Master’s degree, a recruiter at KAYAK reached out to me and asked me whether I would be interested in working in a full-time job at KAYAK, and I was. 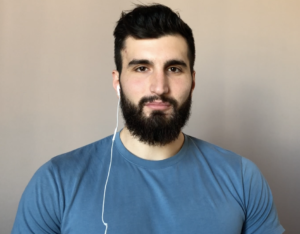 I actually helped a couple of my friends search for jobs. One mistake that I think people do often, not specific to Germany, is that people are too perfectionist – they like want to have a really specific cover letter and they think that the application needs to be a really long process that takes a couple days. As a result of it most people start to procrastinate and say they don’t have the time to apply. So my tip would be to go for large numbers and don’t spend too much time on applications. In a sense it is like online dating: you can’t send a really elaborate crafted message to all of the girls, it’s a numbers game, you can say a lot of “hi’s” and maybe someone says “hi” back to you and then you can be more specific during the interview process. My is don’t be a perfectionist, apply to many companies and don’t make like a big deal – you can’t just allocate one hour and apply to like 10, 20 companies.