Alfie tells us what brought him to Germany and how he got his first  job in Germany  in the video below. Have a look.

Hi I’m Alfie. I’m a British expat living and working in Berlin, Germany. I’ve been living in Berlin for three years now, just over, and I work as a Business Development Account Manager which I’ve been doing for just over a year.

I first came to Germany actually as a student. I was studying twentieth century German history, and we had a course on Berlin, and just as we started we got our reading list and the letter also said that “as you are going to be studying Berlin, you should go and visit it.” So that Summer I did, I came out for a weekend, and fell in love with the place. More or less, I resolved there and then that once I graduated and got everything together I was going to move here.

I was applying for all of the English speaking jobs I could find. I was still studying for my Master’s at this point so it was quite difficult because I wasn’t in Germany, I was not in Berlin to do it, so i wasn’t getting anywhere for a while; I wasn’t sort of on the ground. But in the end a friend of mine pointed me to someone they knew who was looking for Native English speakers to fill a localization specialist role, and I applied for that and after a few interviews I was off at that job – I moved out almost as soon as I finished my Master’s. 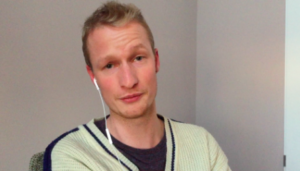 Try and strike a balance between not panicking because you may not speak German or very little German because there are opportunities available, particularly in Berlin, in the startup scene and tech scene for English speaking roles – those opportunities are there for you and you shouldn’t worry about that. But at the same time, don’t get complacent and not learn German because it will help you to learn German and particularly once you are here you will find a lot more opportunities if you learn German. I moved here three years ago, I picked up basic German very quickly, but never really had the motivation to properly learn it because my job is in English. It was only with Brexit and the realization that I might actually need a passport if I want to stay here is that I really properly started learning German in a serious way.

I think if you’re living in Britain or British and thinking about moving to Germany and worried because of Brexit, there are avenues to explore because obviously this is something that everyone who lives here has been thinking about loads. I keep making jokes about having to marry a German, it might come to that, but actually it shouldn’t. There are lots of options. The European Union has a thing called the Blue Card which if you can find a job over a certain income threshold, they’ll just let you in. There’s also lots of talk in Germany about relaxing citizenship requirements for British citizens – there was a recent initiative in the European Parliament to offer associate citizenship for citizens of former member states, aimed at Britain, so I would say to keep an eye on all of those developments. And be aware that even if freedom of movement gets compromised for us, there are certainly going to be options for you to live and work in the EU and in Germany.

And if you are looking for jobs in Germany, make sure you check out expatjobseeker.de