Pascal shares his  Germany job experiences and tips with expats in the following video. Check it out!

Hi, my name is Pascal and I’m a French expat in Germany. I’m a designer and I have lived in Germany for one year now.

A lot of my friends were actually telling me that if they would move somewhere one day they would go to Germany – so I was looking for a new job/new opportunities and obviously I came to Germany because I heard so many things about it – so I said OK lets see.

Everybody was telling me that Berlin is THE city for jobs, for party haha, for everything actually – so I said OK lets go to Berlin. I found my job doing research online.

Berlin is super relaxed – a very relaxed city. People are really easy-going, so its really cool, and the job is the same, very easy-going and really relaxed. I really like that. Berlin is you know, a capital/huge city, but at the same time you feel like it’s a kind of village – so it’s really nice. 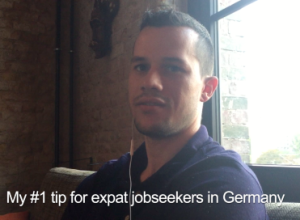 I would say prepare everything if you can – all the papers, all that kind of stuff. Try to think about getting some information on the Internet before coming. Try to contact some people who are actually living in Germany – like on Facebook I am in a group called “The French of Berlin” and it’s actually really useful – if you have a question people can help you out and all – try to get some information on the Internet.

If you want to get to know me better

If you want to check more information about me – who I am and all – visit my resume at expatjobseeker.de

Want to share your tips and experiences from working as an expat in Germany? Then please record and send a video similar to the one above to jesse(at)expatjobseeker(dot)de, or comment about your working experience andÂ share job tips at the bottom of this post.

Want to be found and hired by a company in Germany and network with other local expats? Then post your resume now at expatjobseeker.de!